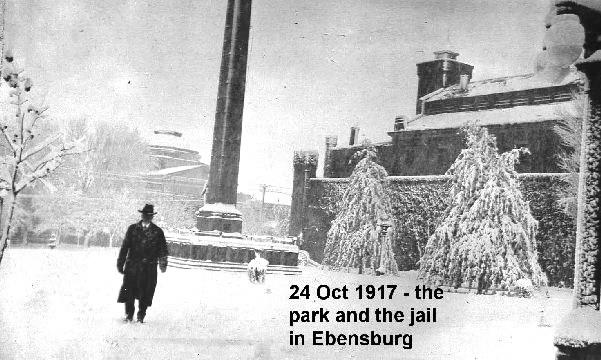 Ebensburg is a borough and the county seat of Cambria County in the U.S. state of Pennsylvania.[3] It is located 25 miles (40 km) west of Altoona and surrounded by Cambria Township. It is situated in the Allegheny Mountains at about 2,140 feet (650 m) above sea level. Ebensburg is located in a rich bituminous coal region. In the past, sawmills, tanneries, wool mills, and a foundry operated there. The number of residents in 1900 was 1,574, and in 1910, 1,978. The population was 3,351 at the 2010 census.[4] It is part of the Johnstown, Pennsylvania Metropolitan Statistical Area.

Ebensburg originated in November 1796, when Congregational minister Rhees Lloyd led a small party of 20 Welsh people from Philadelphia to the lands Morgan John Rhees had chosen for his colony. They selected an attractive spot in the tops of the Allegheny Mountains and there settled what would become Ebensburg, naming it for Eben Lloyd, who died in childhood.[5] Lloyd offered land to the government in exchange for Ebensburg becoming the county seat, which the government accepted.

During the Civil War, men from Ebensburg served in the 133rd Pennsylvania Volunteer Infantry (particularly companies A, B and F)[6] and fought in Allabach’s brigade (Humphreys’ 3rd Division) at Fredericksburg and Chancellorsville. In the Battle of Fredericksburg on December 13, 1862, the 133rd participated in the final charge on Marye’s Heights, suffering heavy losses.[7]

In the borough of Ebensburg, there are three public and two private schools. The two private schools are Bishop Carroll High School and Holy Name Elementary. The public schools are Cambria High School, Central Cambria Middle School, and Cambria Elementary. The fourth school of the Central Cambria School District is located about 5 miles (8.0 km) west of the borough, off Route 22.