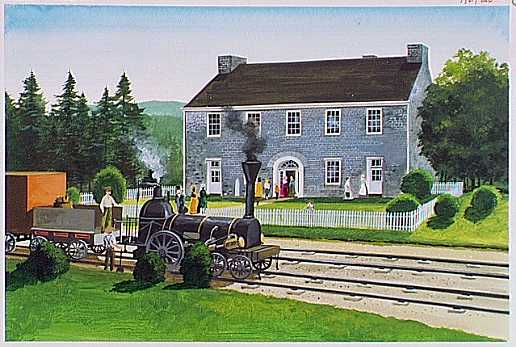 Some time between the years 1830 and 1832, Samuel Lemon built a substantial stone house east of the summit of the Allegheny Mountains. He and his family lived in the Lemon House from 1834 to 1847 and operated a tavern serving passengers of the newly built “Allegheny Portage Railroad” as well as the wayfarers of the “Northern Turnpike.” After Samuel’s death in 1867 the ownership of the home passed to his sons, then eventually out of the family in 1907. The house passed through various owners and was kept in different stages of repair until acquired by the National Park Service in 1966. The Lemon House was the park visitor center and main building until the recent building of a new visitor center complex in 1992.

The Lemon House has reopened as of May 10, 1997. A major restoration project was completed restoring the house to its 1840s appearance. While it is the original house on its original location, there is a great scarcity of information available about the home. Plans or contracts for building the house remain elusive. Documentary evidence is lacking, even as to the exact year the house was built. Much of the restoration was founded on archeology work, period artwork, and documentation of other 19th century taverns in the local area.

Physical evidence in the form of pottery shards and other discards was found in a diligent search of the adjacent grounds. Years of past renovations while the home was privately owned made some details difficult to discern. Out buildings, including the privy or necessary house, which were certain to have existed in the 1840s were not located. Investigations, centered on specific features that were common to taverns, included searches for: bake ovens, fences, ice house, barn and animal related outbuildings, and the location of Samuel Lemon’s original log tavern along the turnpike road route. The countless changes made to the area prevented discovery of many of these features. Some past tenants of the home made major landscaping and structural changes to the house, and even the National Park Service excavations of the 1970s were done before an interest in evaluating the grounds was voiced.
The interior of the Lemon House is even more of a puzzle. There are no photographs, drawings, or written accounts of the interior. Again, the archaeologist has helped to uncover the story. Since about 1980 a series of studies have been done to learn more. The National Park Service Denver Service Center contracted Anna Coxe Toogood to prepare a Historic Furnishings Report. Ms. Toogood’s site-specific historical evidence on the occupants of the house, the use of its rooms, and surviving Lemon family furnishings is the base of many subsequent reports. Historic structure reports of 1984 and paint analysis reports of 1993 add to the definitive knowledge. William L. Brown, III, Staff Curator, Division of Historic Furnishings, Harpers Ferry Center, National Park Service in 1994 prepared a Historic Furnishings report that includes a furnishing plan followed in the recent restoration.

Only the first floor of the Lemon House was restored to the 1840s appearance. The second floor, which would have been family quarters, contains the park library and office space for the staff. The Lemon House is generally open from 9 a.m. to 5 p.m. daily.